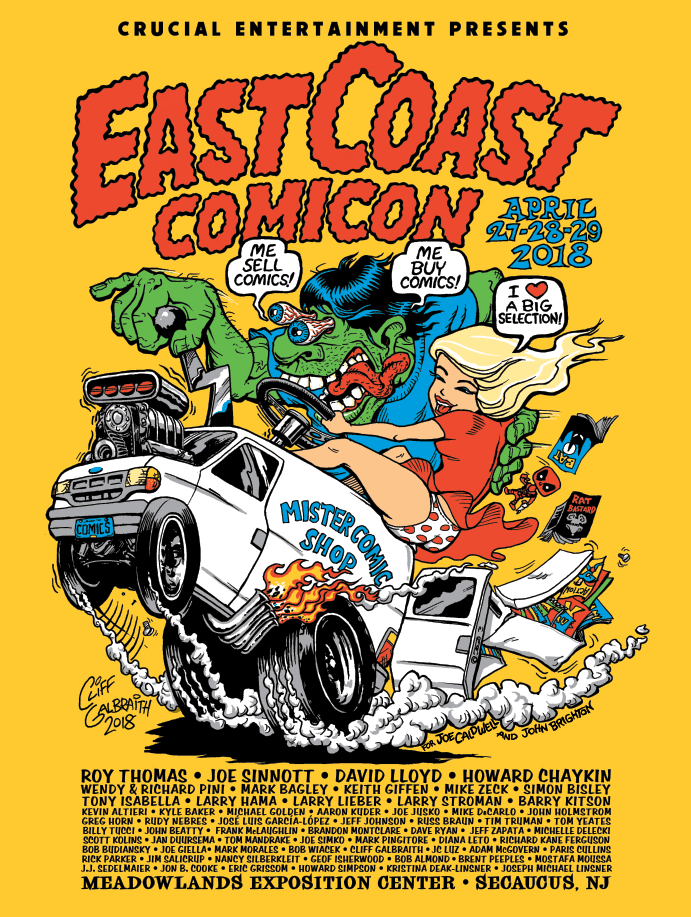 The poster for this year’s East Coast Comicon is a paean to the overlooked heart and soul of comic conventions; the comic dealers. They travel far and wide almost every weekend so we can score some rare gem for our collections. Without them, it’s not a comic con, it’s a festival or an expo or an art show. They are the legion of the long-box, the brotherhood of the back issue, retailers on a road trip.

The art came from a sketch I was working on for a back-to-school window display for a store I had in Laguna Beach, CA back in 2003. Instead, I went with a Popeye-esque character I called Dead-Beat Dad, who was seated in a worn out Lazy Boy chair with a beer can in his left hand and his right hand point his thumb backwards saying GET YER BUTTS BACK IN SCHOOL!

A few months ago, I discovered a sketch of an Ed “Big Daddy” Roth inspired school bus driver with a young girl clinging to him as he burned rubber on a short bus. I changed the bus to a van and some comics falling out the back doors and I had my poster design. It was the most fun I’ve had drawing in ages. The colors seemed obvious and I was done in short order. The T-shirt required a bit more thought in coloring. I wanted a tougher look. Colors you might see on Harley Davidson T-shirt or something a bit more fashion forward for men. I toned down the white with a bone color and made the red and yellow more earthy. 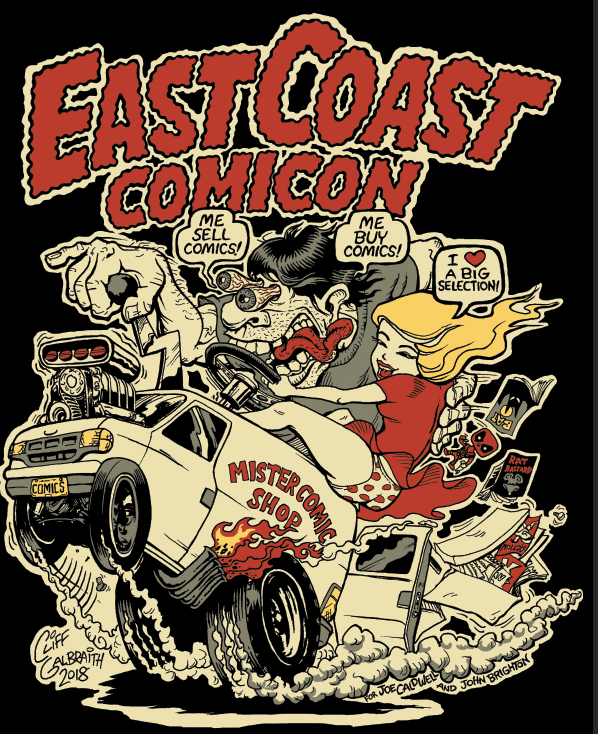 If you look to the very bottom on the right it says FOR JOE CALDWELL AND JOHN BRIGHTON. Those are two great guys who supply many of the TV and movie show cars like the Munster Mobile, Starsky & Hutch Torino, the Monkee Mobile, and a variety of Batmobiles.  Joe and John are the other unsung heroes of East Coast Comicon and knew the gearhead design would be a proper tribute.

A final note; only days after the posters were printed, Jim Starlin and Mark Bagely were added to the line-up. 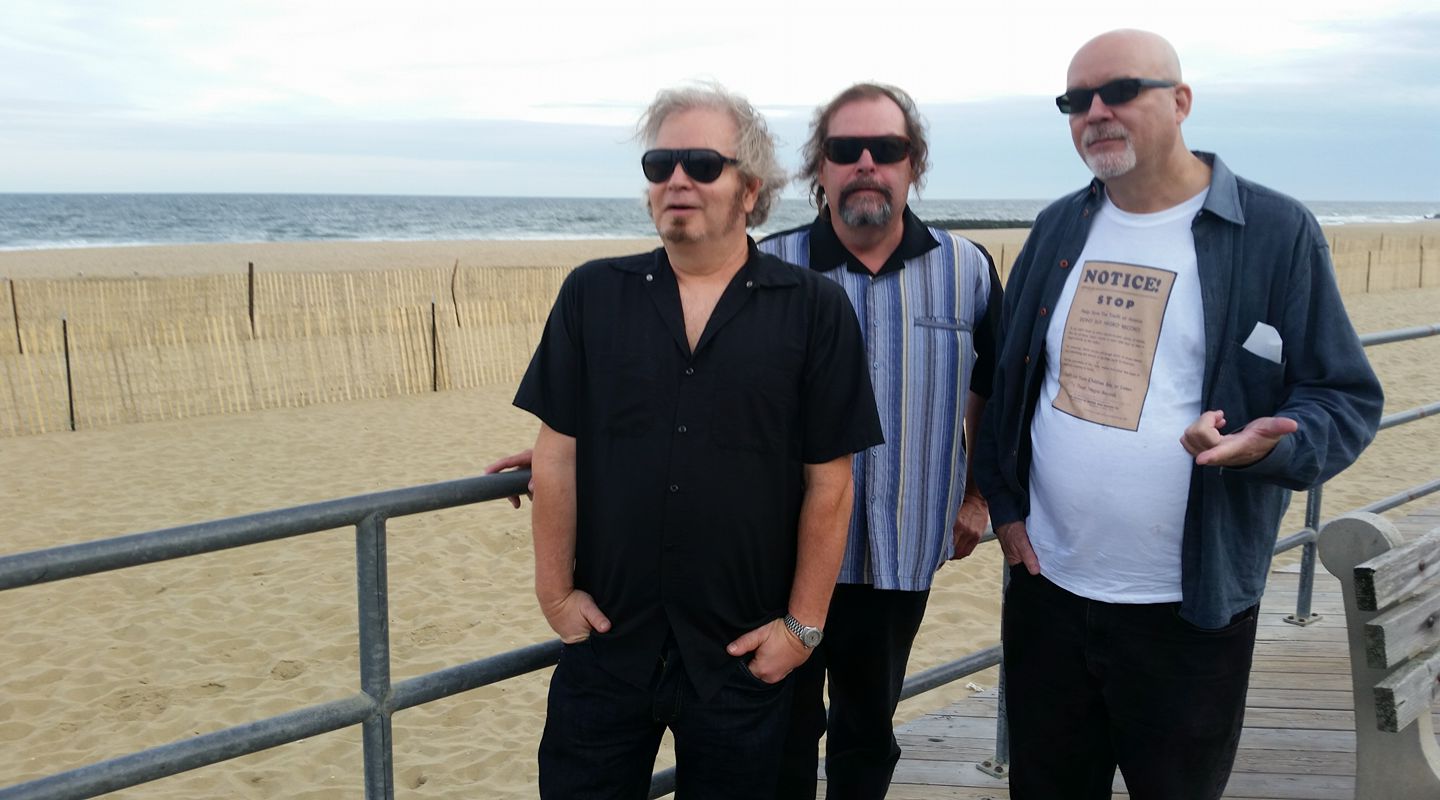 Pinball, cold beer, and rock n roll! With the Mighty Glen Jones of WFMUand Punk Magazine publisher and Ramones‘ cover artist  John Holmstrom on the boardwalk in Asbury Park on the last warm, sunny day of the year.

I invited Holmstrom to the Asbury Park Comicon in 2012, and he fell in love with the town and has returned to hang out and play pinball at the Silver Ball Museum. 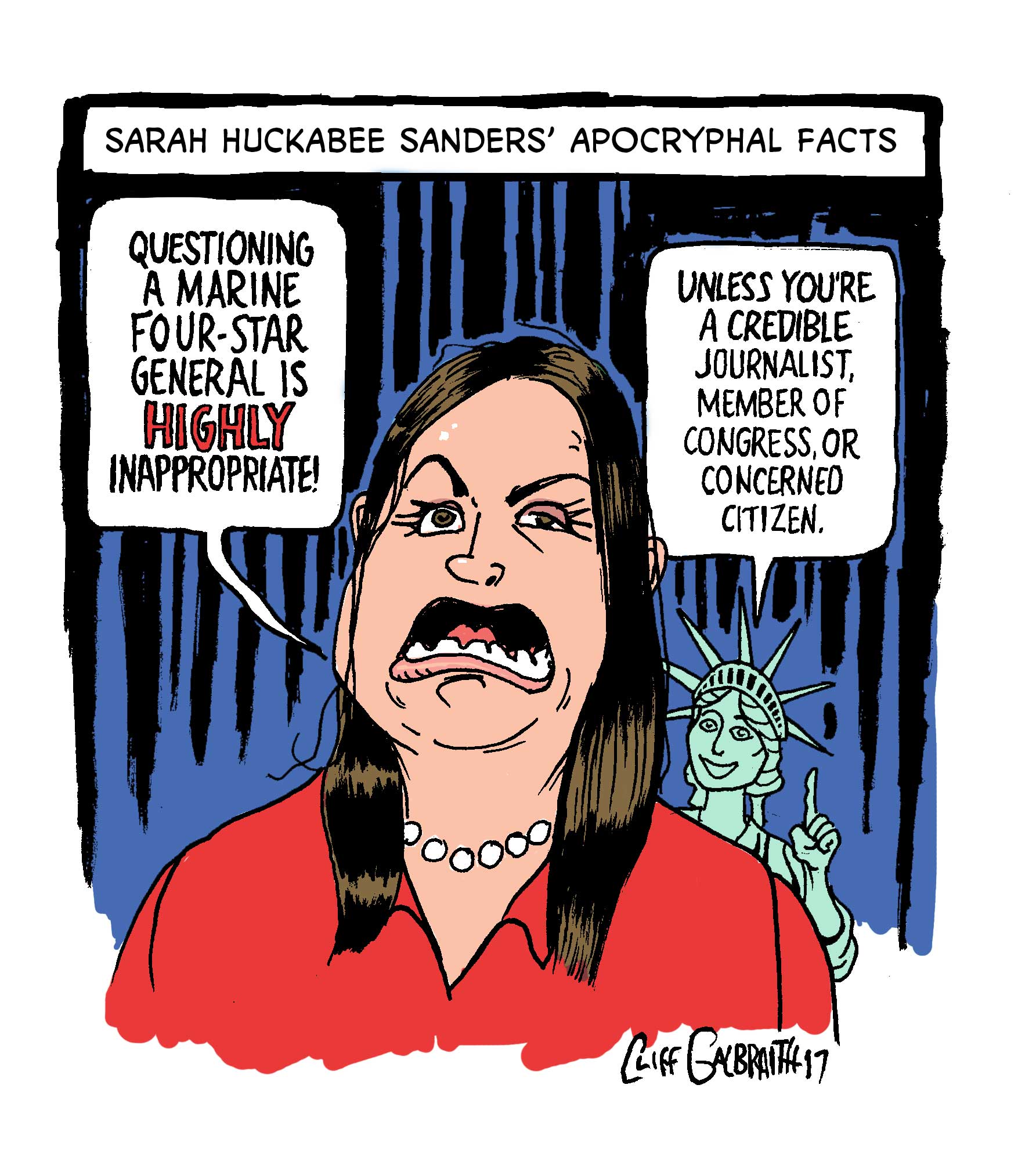 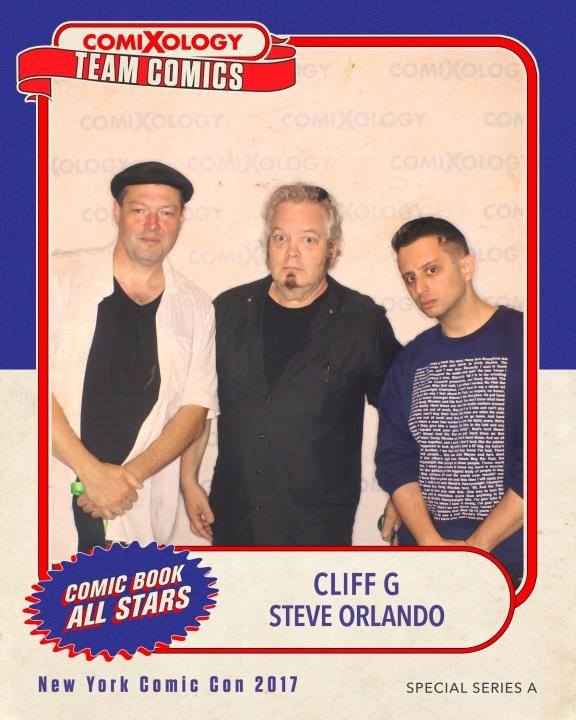 I drew this right after Trump was elected. At the time, I thought he would name Rudy Giuliani as his Attorney General. I also wanted to make a series of faux comic covers like General Michael Flynn as the maniacally obsessed “Punish Her ” going after Hilary Clinton. But the Trump’s Axis of Intolerance lineup has changed so quickly, it’s hard to draw something on Monday and expect it to be relevant on Friday. So in the spirit of supporting all the DACA kids, I thought this would be worth posting. 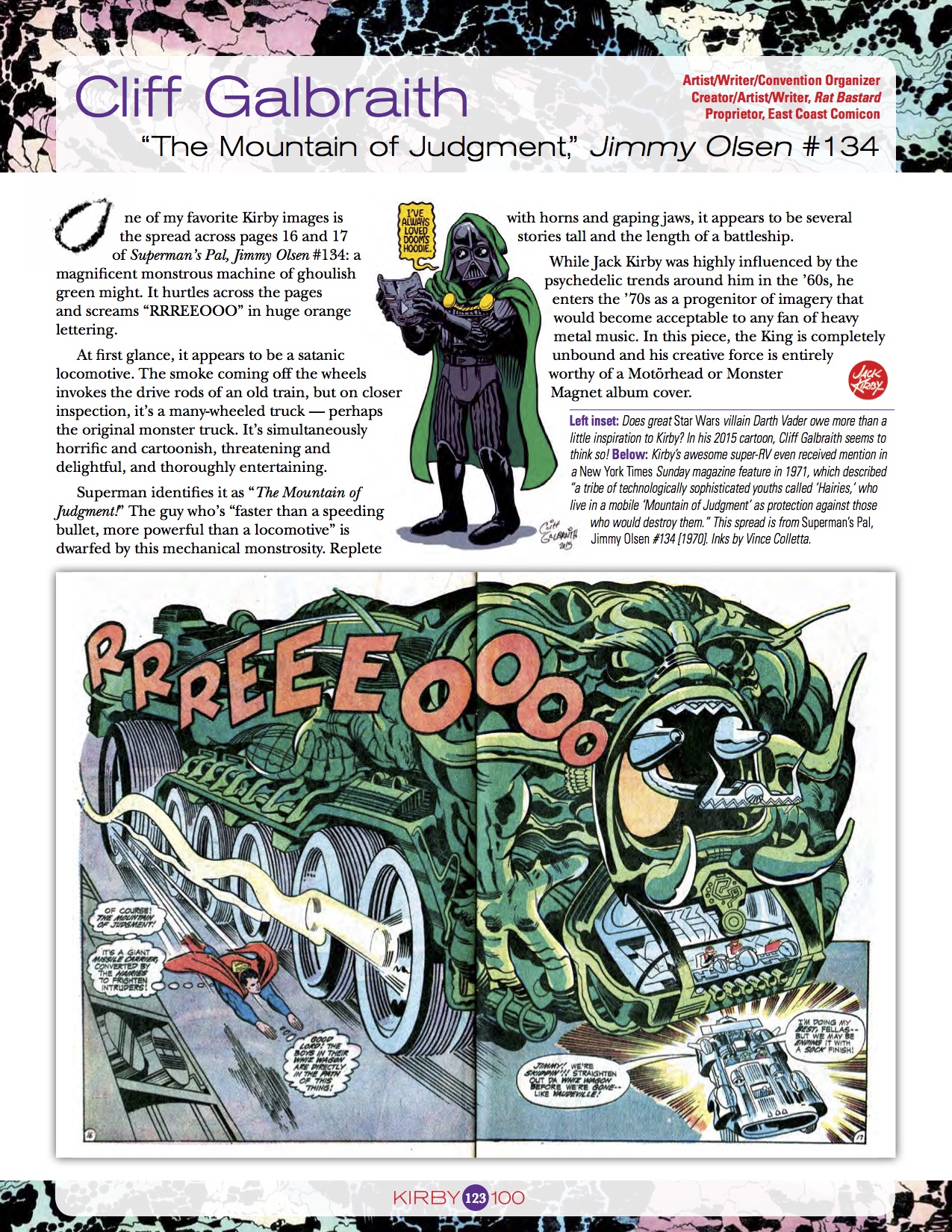 I’m truly honored to be included in the book KIRBY 100: One Hundred Top Creators Celebrate Jack Kiby’s Work. The release of the book coincides with the centennial of Jack Kirby’s birth one hundred years ago this week.

Most of the Marvel superheroes were either created or co-created by Kirby. But for a time, he jumped ship to rival DC Comics to create The New Gods, Mister Miracle, OMAC, Kamandi, and many other characters. Here, I muse about a two-page spread I found to be an example of raw energy and imagination far beyond what anyone else was doing (or has done since) in comics. Years before anyone ever built the first monster truck, Kirby brought us “The Mountain of Judgement.” 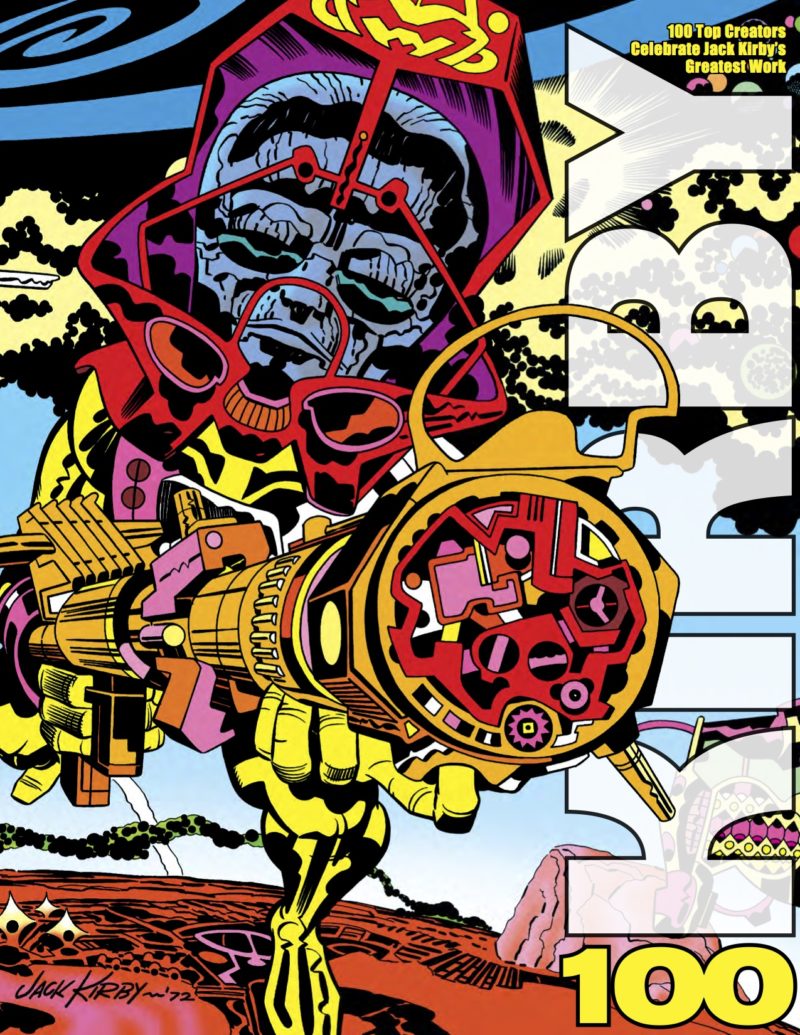 There are some serious heavyweights of the comic art world, corraled into this magnificent tome by Jon B. Cooke and the fine folks at TwoMorrows Publishing.

Happy Birthday to you, Mr. Kirby and thank you for all your wonderful creations.

See the story at 13thDimension.com

As many times as I’ve tried to walk away from Saurus, I keep getting dragged back in. I have nothing against the old characters I originally created back 1986, but to work on them takes away from things I’d rather be working on them today.

Folks keep contacting me on Facebook, Twitter, email, etc asking if they can order Partyasaurus for a friend or Dadasaurus for Fathers Day.

I’ve added a new item — a framed, signed giclee print. I saw quite a few prints at comic cons I’ve appeared at and decided to finally offer my own. Shop at your own risk, Shopasaurus. www.saurusgang.com 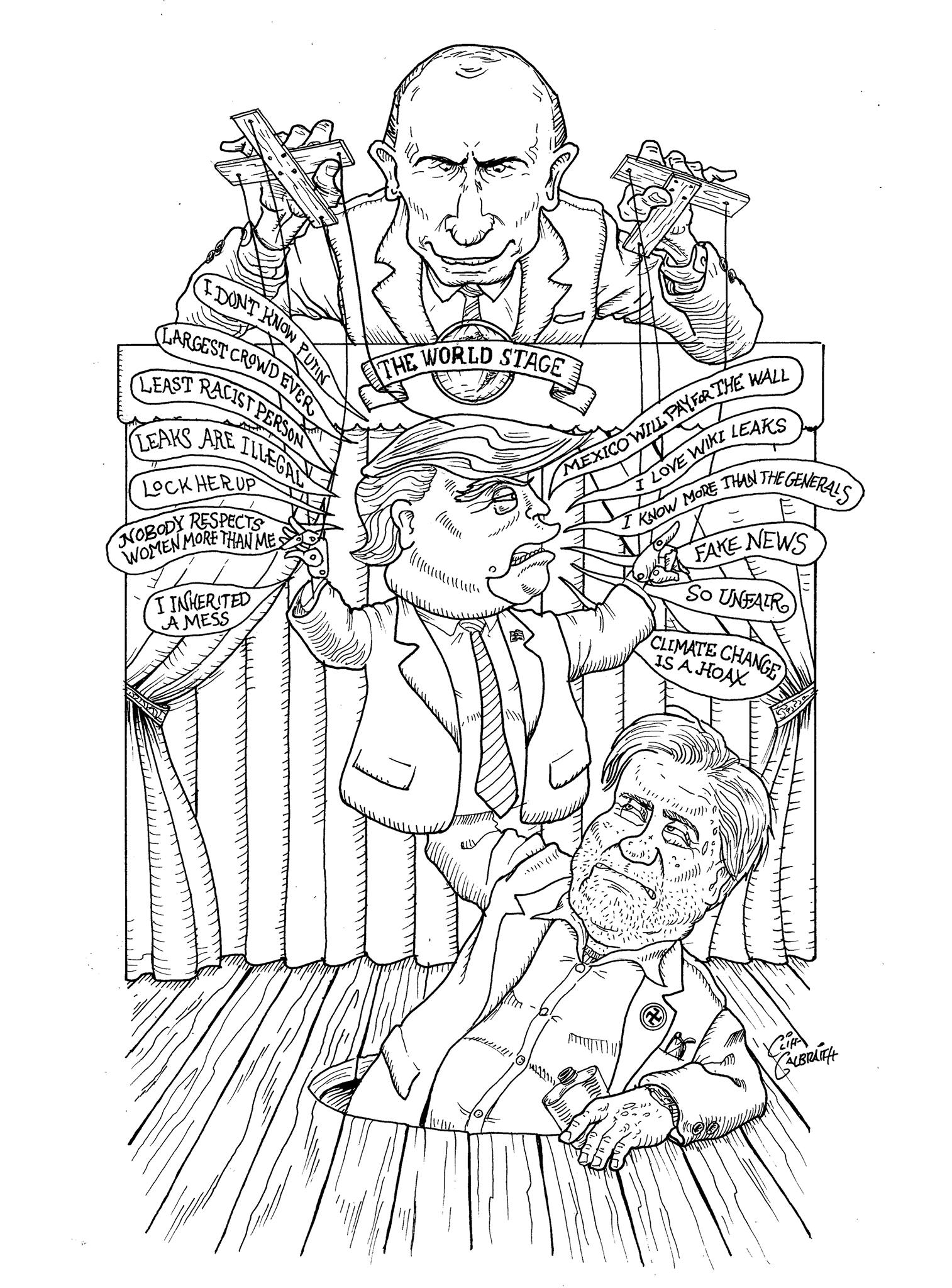 Drawn a few months ago but applies now more than ever. #WTFUSA? 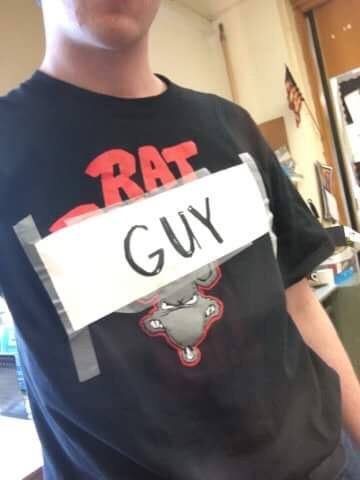 RAT BASTARD FAN OF THE MONTH: Ethan Topping wore his Rat Bastard T-shirt to Edward R. Murrow High School, Brooklyn, NY. His teacher felt it was not appropriate for school, they came up with this solution.

Stay tuned for the further adventures of RAT GUY. 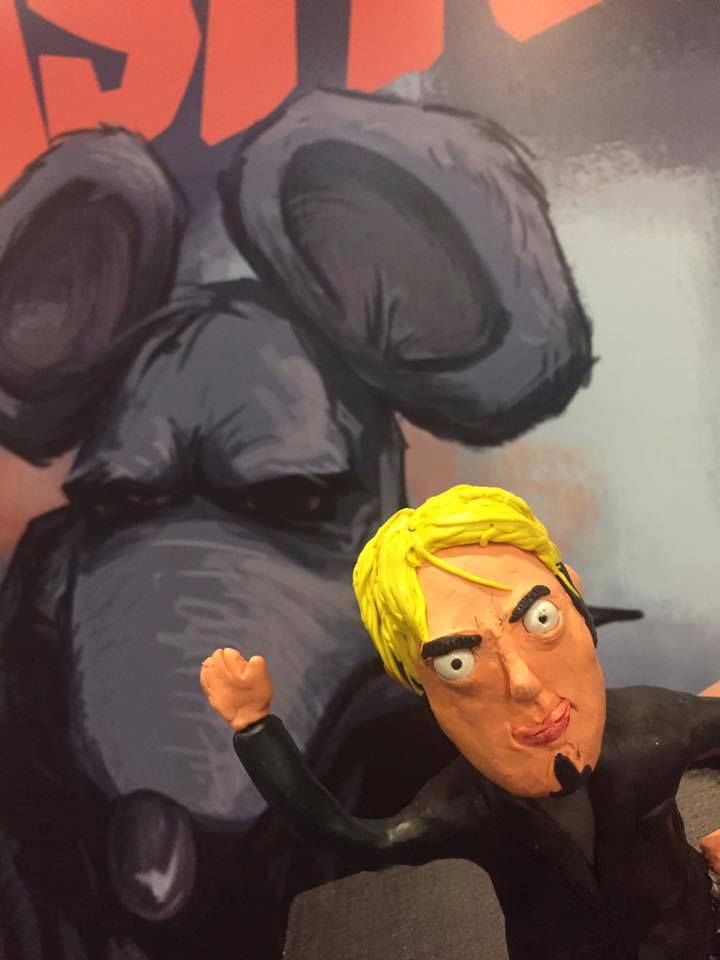 Mike Noren made a Little Cliff claymation character of me to make personal appearances at my booth in my absence at East Coast Comicon.