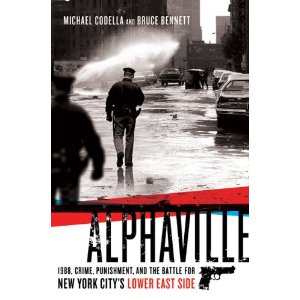 Alphaville: 1988, Crime, Punishment, and the Battle for New York City’s Lower East SideÂ by Michael Codella and Bruce Bennett is a wild ride of cops, drug dealers, junkies, Â in lawless days of NYC. Brought me back to the days when Manhattan was fun, but dangerous.

Co-author Bruce Bennett was the co-host on The Hound show on New Jersey’s legendary WFMU FM. It was great radio show that was broadcast every Saturday afternoon from 3:00 to 6:00 PM from 1985 to ’97. Many a Saturday afternoon I would draw and listen to rare and bizarre rockabilly, soul, psychedelia,punk, r&b, and british invasion tunes. The banter between Bennett and The Hound, AKA Jim Marshall, was full of snide cracks, music trivia, horrible stories from the NY Daily News, oddities, you name it. It was like hanging out in the your favorite bar, with best jukebox and some of your most brutally amusing friends. Well, actually I had all that at the Court Tavern in New Brunswick, NJ, but with the Hound’s show, I could listen to all the great music and wise cracks, but actually get some work done.

During these Saturday afternoon drawing sessions I was free to draw whatever I wanted. Even though I had my own art department at Talking Tops, I rarely had time to experiment — it was all business. But at home, listening to The Hound, it was all fun. I’d sit and scribble, and giggle, draw some more, and listen to more great music.

A third regular on the show was Eric “Roscoe” Amble. Roscoe was a founding member of Joan Jett and the Blackhearts, and was now touring in various bands throughout the years of the Hound’s show. While on the road, Roscoe would call in with a “Vibe Report” about what was going on where he was playing that weekend. He always had an amusing story or an observation about some strange venue he had just played.

All the time I was listening to The Hound and Bruce Bennett talk about Roscoe, I was working on the early version of Rat Bastard. Somewhere Â around ’96 my character needed a name, and I knew that a “roscoe” was an old-time expression for a gun. Â And that’s how Rat Bastard’s Roscoe Rodent got his name.

So thanks to Eric “Roscoe” Amble, The Hound, and Bruce Bennett, for all the Saturdays of great tunes and laughs, and inspiration for one of my favorite creations.

I’d hoped to have had this one ready for MoCCA Fest in April, but we changed the name and well, you know how it is. Or do you? Inspiration comes and goes. Ideas seem great, then days later they don’t. Characters take time to develope Â — I found some notes for this story, and only one out of the original five names or characters survived.

Also, I’m collaborating on this with my wife, Judie this time. It’s based on a concept she had many years ago. It made us laugh back then and we began noticing things and phrases that would go into here story. A few years ago, I was looking for an animated project to work on, so I started conceptualizing her story ( some of it was posted here about two years ago). A lot of it is based on our days in New Brunswick , NJ where we met.

So here’s the cover. One things for certain — this is a lot easier than those damned Rat Bastard pages. Well, not easier, just simpler. After all, none of this is actually easy.